Welsh art goes under the hammer at London auction 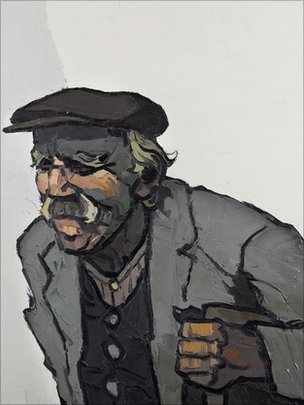 Art works by Welsh artists Sir Kyffin Williams, Augustus John and Sir Cedric Morris will go under the hammer at a sale of 20th century art next month.

Much interest is expected for seven of Syr Kyffin Williams’ works, which have estimates up to £30,000.

There is “excitement” too about a pencil drawing by Augustus John, which has never been offered for auction before.

“Certainly the market for Sir Kyffin is very resilient,” said Matthew Bradbury, the head of Modern British Art at Bonham

“It is very unusual to have so many varying types of his work in the same sale too,” he added.

Interest in Sir Kyffin Williams’ work is “almost 100%” from the United Kingdom, he said.

“When we offered a similar one with waves, four years ago, there was a lot of interest, as it is almost abstract,” Mr Bradbury added.

A pencil drawing by Augustus John, who was originally from Pembrokeshire, was described by Mr Bradbury as “an exceptionally fine pencil drawing of a seated woman”.

“It was brought from a gallery in Bond Street, which no longer exists, in 1935,” he added.

The piece shows the way the artist “would do interesting.. detailed faces then leave the body quite sketchy… almost unfinished, but the two complement each other,” Mr Bradbury added.

“He was at the forefront of British art, but his work is often quite similar in that it focused on flowers,” said Mr Bradbury.

The 20th century British Art sale will be held in Bonham at New Bond Street, London on 17 November at 1400 GMT.